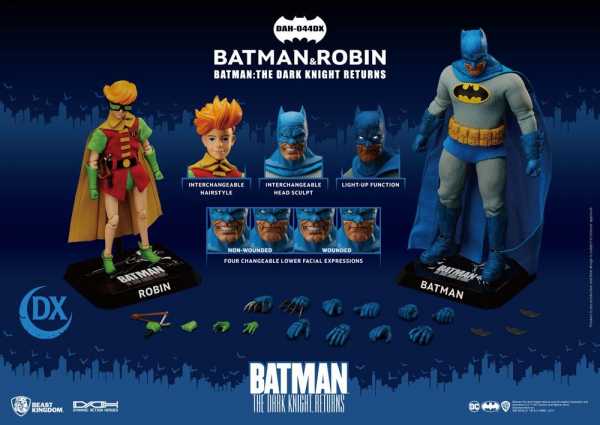 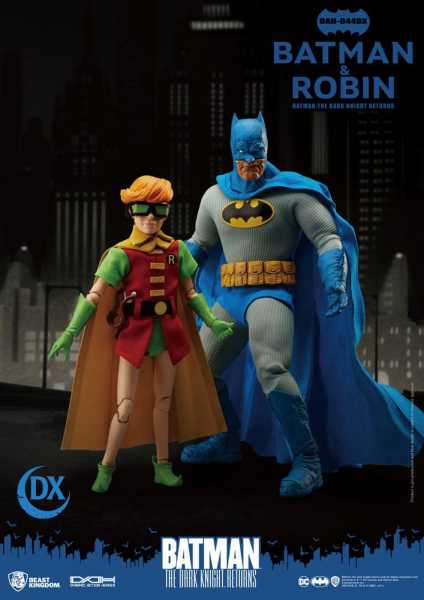 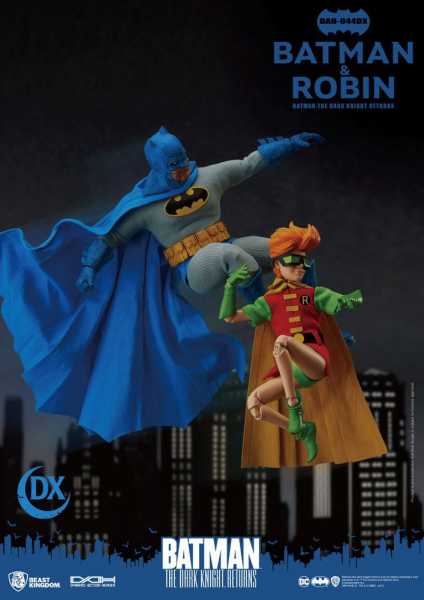 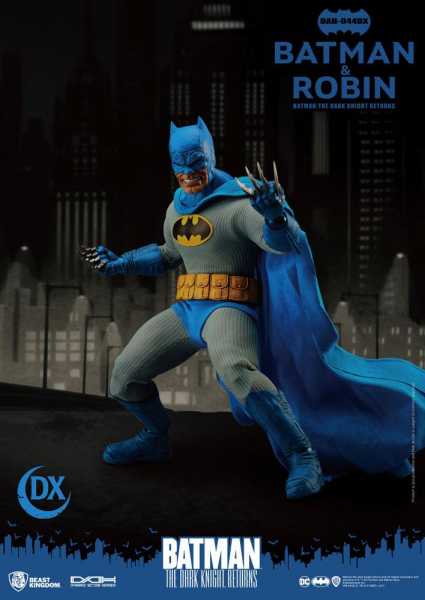 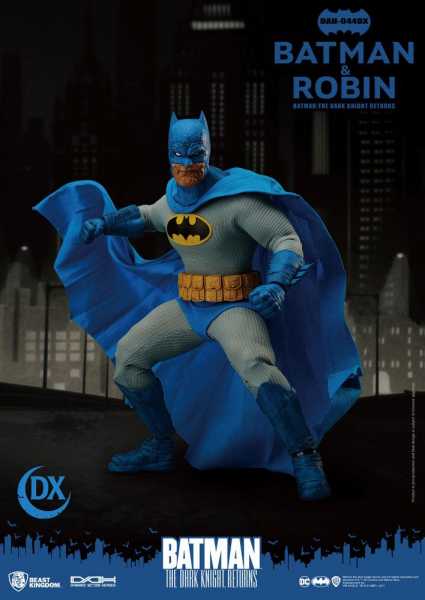 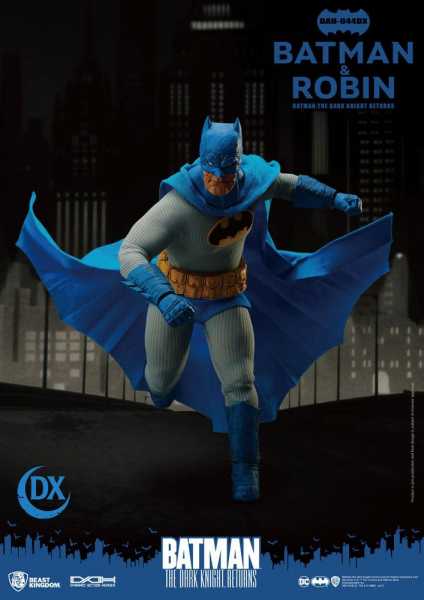 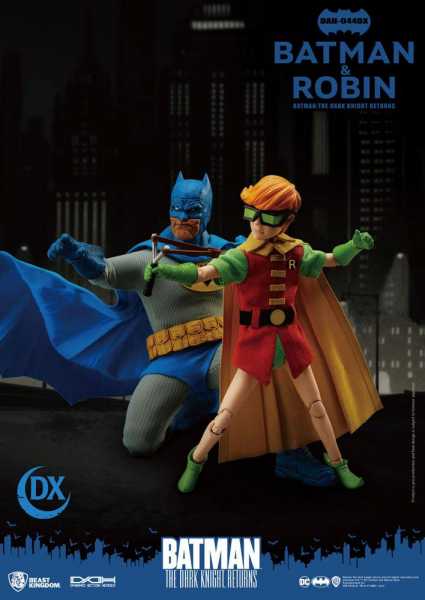 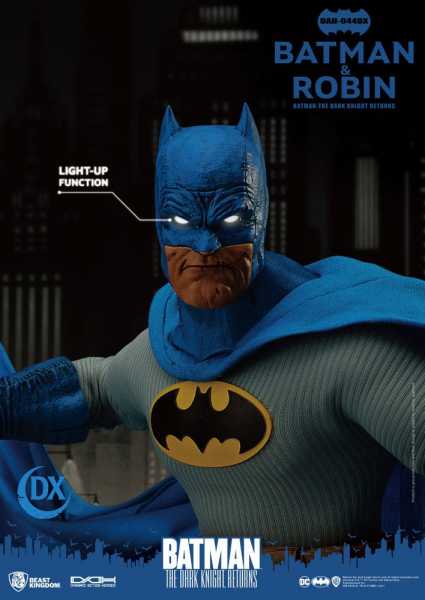 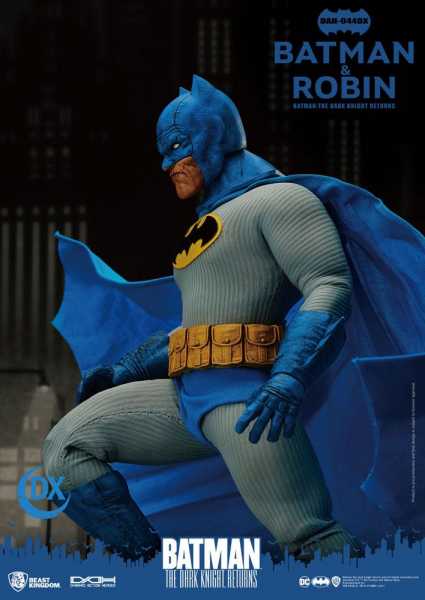 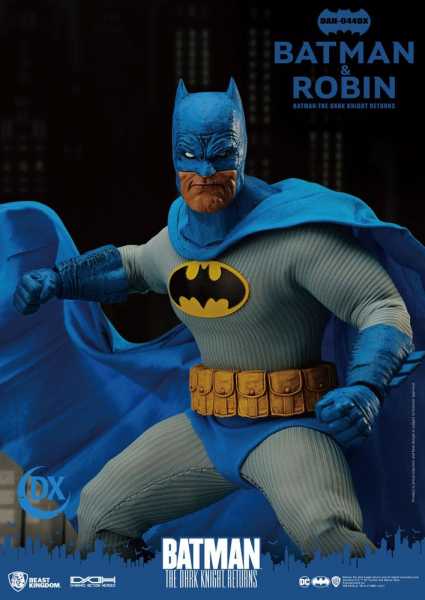 One of the most celebrated comic books in history is making a splash yet again with Beast Kingdom's 'Entertainment Experience Brand' in the Dark Knight Returns, this time with his sidekick: Robin by his side! Who will save the bustling Gotham city from the clutches of the evil mutants, the Joker, and many more characters from the rogue arsenal of foes Batman has collected? This is one mission that the now older Batman and the 13 years old Carrie Kelley, AKA Robin must complete, or risk losing the soul of Gotham for good! With a sense of determination and a whole city to save, The Dark Knight returns one last time to dispatch some serious justice to the enemies of Gotham City!
1986's radically influential Dark Knight Returns mini-series introduced fans to a Batman unlike any other. Seemingly retired, this older, brute of a man is jaded yet determined to not let his city fall.
Beast Kingdom's highly articulable DAH (Dynamic 8ction Heroes) series launches a new pair of collectable sets for a new generation of fans that are yet again finding the wonderful world developed originally by the celebrated comic artist Frank Miller.
The DAH-044 Dark Knight Robin is a singular figure based on the 13 year old vigilante and sidekick. A perfect companion to the original DAH-043 grey colored Batman set. The DAH-044DX however is a special edition that includes both Robin and a comic inspired, blue costumed Dark Knight figure.
The Batman in the DAH-044DX is an imposing action figure standing at 20cm in height with nearly 20 points of articulation.
The figure accurately recreates the costume design from the original comic book with detailed accessories, and real cloth used for the clothing and cloak.
Batman's signature Batarangs as well as multiple head sculpts, replaceable mouths and hands are all, including giving fans ample ways to pose and recreate famous scenes straight out of the comic.
With the Robin figure, a new child sized DAH design accurately recreates the petite frame of the young vigilante. Perfectly juxtaposed when standing next to Batman, the design includes 18 points of articulation, standing at a 16cm in height!
The two included head sculpts recreate Robin's free-flowing hair, and in addition the red and green costume is fully made of real cloth showcasing the unique design. The detachable slingshot and goggles also allow for the ultimate in customization. A perfect collection for fans of the classic comic book.
DAH-044DX The Dark Knight Returns Batman & Robin:
All included accessories from DAH-044 set in addition to:
- Batman: Comic blue color with muscular body and around 20 points of articulation
- Two (2) types of replacement head sculpts (regular eyes, frowning eyes)
- Two (2) types of replacement mouths (normal, wounded)
- Six (6) types of replacement hands (fist, open hands, open hands style two, relaxed, gripped, dart throwing)
- Three (3) Batarangs
- Built-in light function in eyes (LR-41 X3 pcs)
- Special, branded figure base with bracket
Achtung! Nicht für Kinder unter 3 Jahren geeignet wegen verschluckbarer Kleinteile. 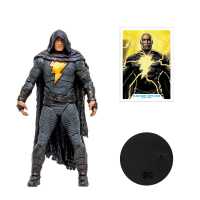 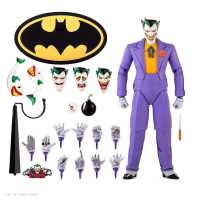 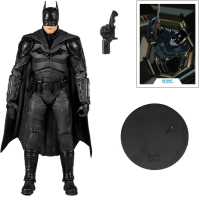 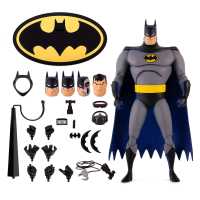 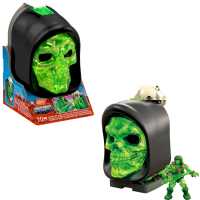 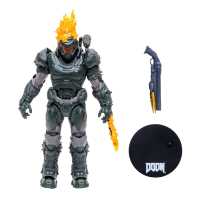 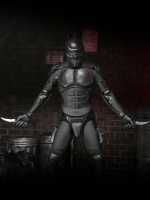 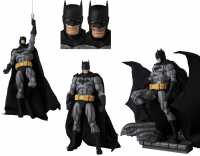 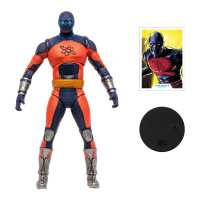 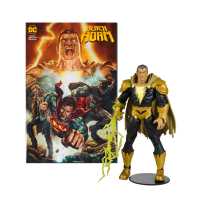 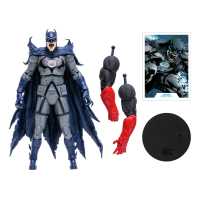 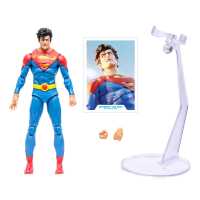 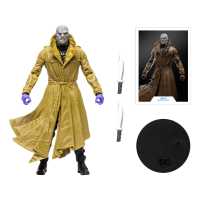 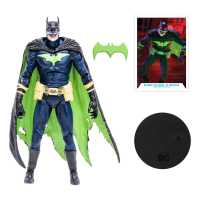 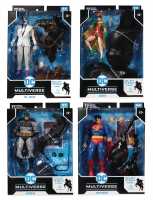 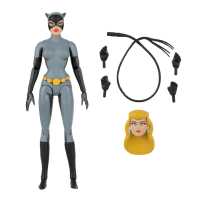 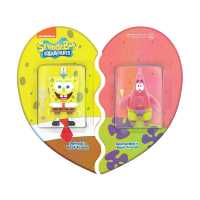 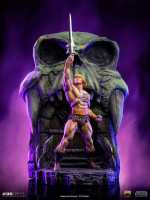